While it doesn't have the same reverence that the Tokina 90mm f2.5 "Bokina" commands, it maintains a sort of cult status probably due in no small part to its rarity and the lack of information available regarding the Tokina AT-X 60-120mm f2.8.

In the brief time that I've had with this lens, it seems to render the out of focus quite smoothly and is quite sharp.  Some minor drawbacks include some purple fringing on digital bodies, (no experience with it on film) and a rather long minimum focus distance of 1.2m.
Posted by FotoPete at 20:20 No comments:

Fast Forward, Sony A7 and the Meike MK-AR7 Grip

I had recently remembered that I had started a blog with the full intention of posting but as you can see, it flopped as soon as it began...two years ago.

Fast forward to present day and much has changed.  Mirrorless cameras have turned the photographic market upside down (i've sinced sold my dSLRs) 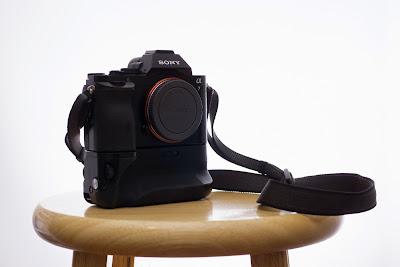 I'm actually cheesed about the sensor reflection coming from the Pentax FA50 Macro.

It didn't take long after the initial Nex-3/5 for Sony to drop the A7 on us as well as a more fully realized accessories set for enthusiast/pro use.  One of these is a much desired ($300) vertical grip.  (All about that base!)  It took some time before another option dropped into the market in the form of the Meike Mk-AR7.

At first look, it is basically a carbon copy with simplified materials/construction to trim the cost down to...$85US?  More so however, it comes engineered with a radio remote for hands free/interval shooting. 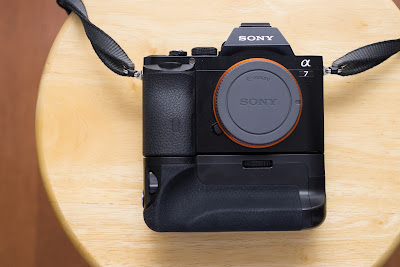 I'll be upfront here, I have no affiliation with Meike or its associates, I'm just another average joe hobbyist that hit the Buy-It-Now button on eBay the moment this thing went live.

I haven't used this grip extensively enough to really tell you whether it will work for you but my first impressions have been generally positive and at the $80-100 price range depending on where you are, curiosity/impulse won't break-the-bank. 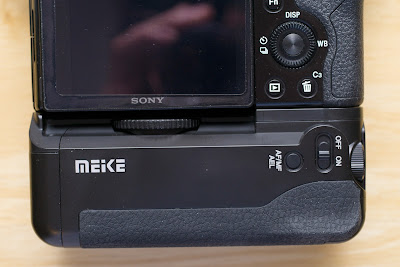 The Meike MK-AR7 features a  flip on/off switch vs dial switch in the Sony Grip.

The Meike MK-AR7 grip attaches like the Sony VGC1EM Grip.  Noticeable immediately is the matte finish of the plastic surface and the rubber vs the Sony grip where it matches the finish on the body.  The rubber is also a little softer and kinda reminds me of the rubber used on the Nex-7.  (knock on wood)
The buttons are pretty close with the onion texture but have a distinctly tactile feedback vs the buttons on the camera.

Looking into the internals, Meike has opted to simplify the construction of the hinged door + pull out battery tray.  They have melded the tray and door into a single unit not unlike the battery tray you would see in a Canon 1D series body with a twist lock. 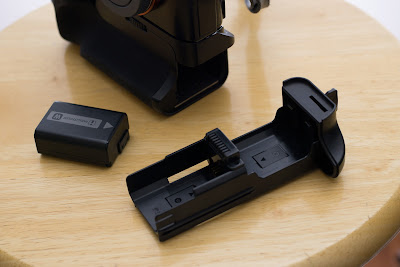 The battery slot on the left operates as in the OEM version with a small clip at the end to hold the battery in place.  On the other side, you have reduced space due to the door being attached and as such you'll have to insert the battery with the flat end going in first before the end with the contacts.  A little force is needed and the plastic does seem to flex a little but I don't think it will be that big of an issue.

The overall design of the grip by Sony vastly improves the portrait handling characteristics with curves in the right places.  For the money, choosing the Meike is not a bad investment for the casual user who wants the basic form factor but can forgo the luxury of weather sealing and a stronger/better build.

Posted by FotoPete at 23:40 No comments: 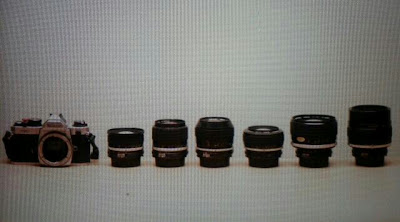 Just cause.  How many of you can actually justify the lens collections you have?  Where is that first 50mm lens you bought...how far down are you?

It's a weird world out there post mirrorless cameras.  Things have changed when dSLRs where seen with lenses other than their own and now the scene has changed again with mirrorless interchangeable lens compacts.  People began combing their antic, the local garage sale and the good ol' eBay for old film lenses and other optical relics to slap on their cameras.

For the first time, photographers are choosing the cameras to mount on their lenses and not the other way around.  Its a peculiar thing.

Anyhow, welcome to my blog.  (I just created this blog and already got 9 page views...what does this look like? Lens Buyers Anonymous?)  I used to group stuff on flickr but my account expired some ways back and I lost contact with the community.  Chances are you have come across this blog with interest in old lenses.  I haven`t gotten as adventurous or crazy as some but hopefully I can give you an idea what some of these lenses are capable of and a reason to add another dimension to your camera...I mean photography.

Thanks for reading,
Pete,
Posted by FotoPete at 21:58 No comments:

FotoPete
Has chronic LBA. Will leave armchair to attempt to take an actual photo every once in a while.